Obama vs. Romney: The Rematch

President Barack Obama’s allies in the press are clamoring for Tuesday night’s debate in Hempstead, New York as the Dear Leader hopes to springboard off of Joe Biden’s bully pulpit performance in Danville, Kentucky. Campaign advisers are promising a more “aggressive” tack from Obama which could force a bare-knuckled stance from Governor Mitt Romney. Paul Ryan was as polite as you could expect a politican to be on Thursday night, but don’t expect the same from Romney. If Obama takes the Biden approach in this debate, Romney will not take it lying down. END_OF_DOCUMENT_TOKEN_TO_BE_REPLACED

The lame attempts by the press to paint Mitt Romney as a first rate-wuss are puzzling. This isn’t the first time that a Republican candidate for president has been portrayed in such a demeaning fashion. If what the media’s doing sounds familiar, it’s because they tried it back in 1988 with George H.W. Bush. In case you forgot, it didn’t work. Bush crushed Democrat Michael Dukakis in the general election by an eight-point margin. Why is the media implementing a previously failed strategy? Simple. People have short memories. Plus, Obama doesn’t really have much else going for him. What’s he going to do? Tout the economy, high unemployment, abysmal GDP growth? No, his hand is limited. Attacking, vilifying, and misrepresenting his opponent; this is what Barack Obama must do to avoid packing his bags in November and the media is more than willing to assist. END_OF_DOCUMENT_TOKEN_TO_BE_REPLACED 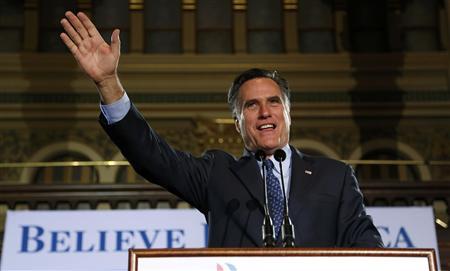 I know most of you are having a hard time containing your excitement over Mitt Romney’s Tuesday night victories in Maryland, Washington D.C. and Wisconsin. Just imagine – we’re one step closer to a Romney coronation in Tampa. How historic. Is this what you all had in mind back in 2009? The Tea Party forms. Constitutional conservatism is revived. The Republicans take back the House in 2010. And a moderate former governor of Massachusetts is being propelled toward the 2012 nomination by the GOP establishment? The Tea Party does the hard work of beating back Obama and the Democrats and the establishment reaps the benefits? END_OF_DOCUMENT_TOKEN_TO_BE_REPLACED

Ryan: “We’re Going To Be Entering a Counterproductive Phase..”

Paul Ryan is the latest Republican to throw his support behind Mitt Romney – endorsing the former Massachusetts governor last Friday. It was easy to shrug off the others who filed in line behind the GOP’s candidate: Bush 41, Chris Christie, John McCain, establishment Republicans, the usual suspects, etc. But Ryan’s endorsement set off a warning flare for conservatives. Members of the establishment have been telling us that a drawn-out primary process is bad for the party and bad for whoever our candidate might be. That sort of thinking now seems to be permeating within the ranks outside of the establishment – as evidenced by Ryan’s sudden endorsement. END_OF_DOCUMENT_TOKEN_TO_BE_REPLACED

Word to Obama: You’ll Have to Run on Your Record

Who does Obama think he’s campaigning against?

What happened to Ann Coulter’s sensibilities?

John King and CNN get it thrown back in their faces.

Been paying attention to Iran lately?